REVIEW: ‘The Little Mermaid’ is a triumphant return to theater

When mermaid princess Ariel enters the human world with legs, she is helped by her hilarious friend Scuttle, to learn how to walk (and tap dance).
Larisa Mae Photography
Posted Thursday, April 29, 2021 12:00 am
Sam Desmond

With the glorious return of live theater in New York—a very welcome reprieve from the long-standing pandemic isolation—the Noel S. Ruiz Theatre in Oakdale put on the perfect “welcome back” production for art-starved theatergoers looking for a stage spectacle to behold, with some much-needed nostalgia.

“The Little Mermaid” sold out seven of its nine live performances in the past two weeks, proving that the local community has embraced this reopening with loving arms and enthusiastic patronage.

And the show delivered on a year’s worth of anticipatory glee.

Director Kevin Burns captured the rich and sumptuous world of the merfolk, contrasted with the more sedate human world with Technicolor seascapes and Gap-khaki beach scenes.

Costume and wig design by Ronald Green III was quite the feat, as he made flowing, colorful, draping skirts to mimic the mer-tails of Ariel and her family. When Ariel is on land and covered by some raw canvas and taught to walk by Scuttle (whom Anthony Arpino plays to tremendous comic relief with his “thoity-thoid and thoid” accent and surgeon-precision delivery of malapropisms) and his fellow seagull friends, we’re introduced to uniform, identical neutrals with just a touch of orange at the feet, depicting the human world as one of order and compliance.

To contrast, in the delightful “Under the Sea” extravaganza is a diverse color burst of different types of seafolk.

In standout performances, Jordan Yates and Richie Castranova as Sea Witch Ursula’s minion eels, Flotsam and Jetsam, dazzled as consummate Chelsea boys who never stopped with their fabulous body flows and Studio 54-whisperings to Ariel to sign over her voice.

As the crown jewel of the piece, Jillian Michelle Smith as Ariel was equal parts ingénue and ingenious playing the plucky, curious, and steadfast lead. Her strong voice, contrasted with the delicacy of her decision to make a fateful trade with Ursula, was masterful and hinged the drama of the production.

In “Kiss the Girl,” we see Smith portray an anxious, yet reticent, young lady looking for her first kiss with her beloved prince and is all the while a portrait of the innocence of young love combined with a sacred need to defeat a lifetime of capture.

The ship, captained by Prince Eric, came onstage with the presence equivalent to a horse at the Metropolitan Opera, as a great feat of command.

Jennifer Geisman as Ursula was "divine" and maddeningly lovable as the scorned Sea Witch after Triton’s throne. (Note to parents who may watch streaming versions in the future—the stage adaptation has Ursula and Triton as warring siblings, different from the 1989 movie.)

With lots of young viewers in the audience, “The Little Mermaid” is sure to have inspired a new generation of theatergoers as much as it has renewed the magic for those who have waited over a year to applaud. 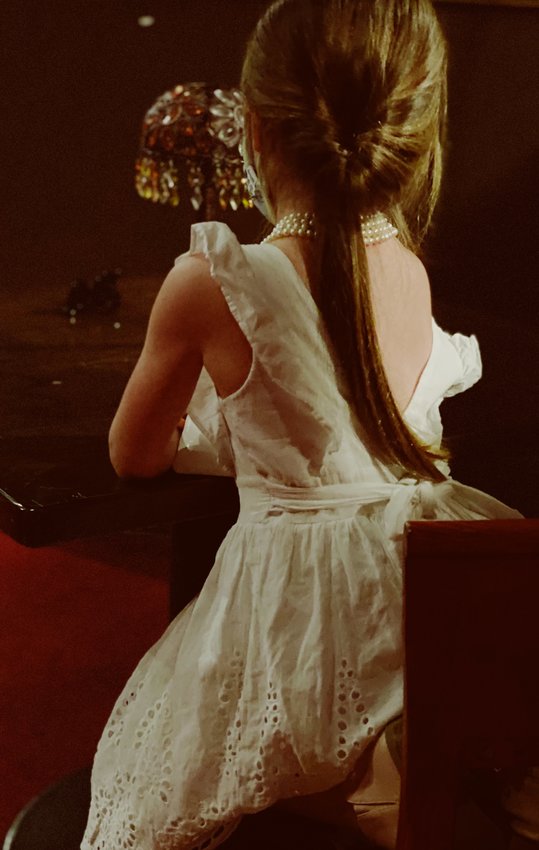 Seasoned theatergoer Makena Berube, 5, was dressed in her best pearls to watch “The Little Mermaid.”

Born with a knack for giving back